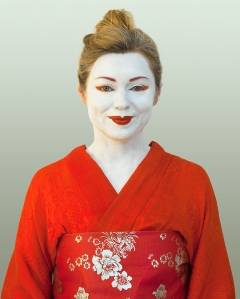 occupation: credit risk manager but currently taking time off to educate my child

thoughts about Fukushima: How many disasters (Fukushima, Chernobyl) is it going to take until people start thinking what are the implications of employing undeveloped technologies like nuclear power and putting millions of people at risk? It is too easy for ordinary people to go along with the government’s declared good intentions for cheap energy, but it takes more effort to consider the risks for people, environment and life in general. If we are not brave to stand up to governments and corporations that put economic growth and profits before welfare of all living things, then it might be too late to do anything when things spin out of control.

thoughts about the project: Red Kimono is a space to stop and reflect on interconnectedness of everything and everyone. We all have to take responsibility. Fukushima is not a problem for Japanese people only, it is our problem, the people of Earth’s problem. I wear my kimono in solidarity with people of Japan.