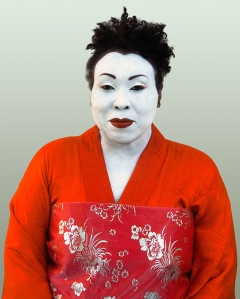 racial heritage: I am human. We are all one people. Race is a man made construct designed to separate and control us.

activism: Food Justice ~ Good healthy food that does not cost the earth is a basic human right. Food is more than sustenance It is important to understand the connections between health, nutrition, environment, soil, seed, culture, spirituality, customs, culture

thoughts about Fukushima: It is a tragedy and a shame. We did not learn from Chernobyl. It is a scandal and an outrage that what is going on in the aftermath is kept hushed or not considered news worthy by a media obsessed with the fake and dysfunctional who masquerade as being famous.

thoughts about the project: As a planet we are all connected… animals, oceans, humans, rocks, plants, soil, the air we breathe…. and the negative consequences of our irrational and irresponsible human actions no matter where it has happened impacts on us all. Red Kimono is a reminder that as human beings we are the same, we are one, it unifies and eradicates the social and cultural constructs that exist only to divide us. It is a powerfully evocative awareness raising tool.

One thought on “Dee”